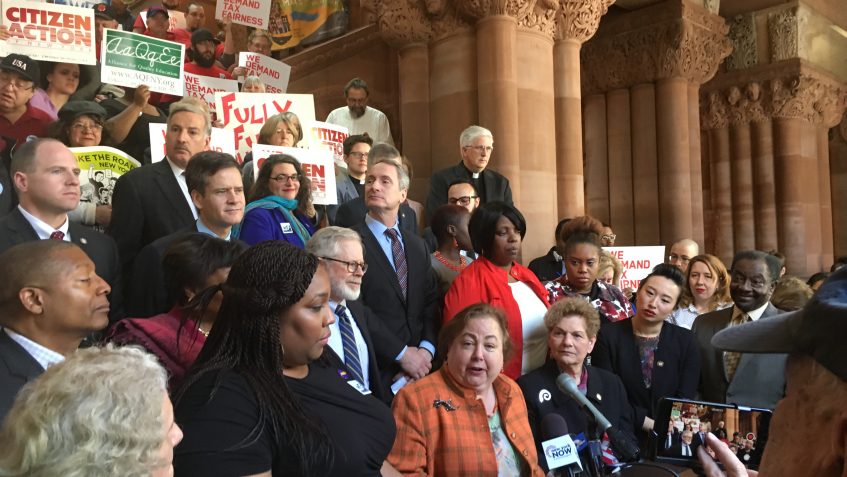 by admin in Home Page, News
New York – Today, State Senator Liz Krueger and Assemblywoman Carrie Woerner released a letter signed by 42 legislators to EPA Region 2 Director Gary Klawinski, calling on the EPA to revise their recent five-year review of the Hudson River PCB Superfund Site cleanup to mandate more dredging by GE in the Upper Hudson and more investigation of remediation effects in the Lower Hudson. The letter is reprinted below and can also be viewed here.

“GE’s toxic legacy on the Hudson continues to be an albatross around the neck of communities all along the river,” said Senator Krueger (D-Manhattan). “The cultural, recreational, environmental, and economic benefits of the river for New Yorkers and visitors have been held in check for decades, and now the EPA is saying we’ll have to wait at least another fifty years before it can be considered safe. This is completely unacceptable. GE made this mess, and the EPA must hold their feet to the fire until the river is clean.”

“Returning the Hudson River to its pre-contamination state is critical to the health and economic vitality of our riverfront communities,” said Assemblywoman Carrie Woerner (D-Round Lake). “By dumping toxic waste into our river, GE has compromised the wellbeing and quality of life of current and future generations. It has negatively impacted local property values and small businesses, as well as this region’s ability to attract tourists. This issue is very straightforward: GE is responsible for cleaning up the mess it created, and the EPA is responsible for enforcing that clean-up while ensuring the health and safe use of our natural resources. GE benefited financially while it was dumping dangerous chemicals into the river, and certainly has the means to rehabilitate the river it so thoughtlessly damaged. We will know that the cleanup is truly complete when it is safe for families to eat the fish from the river, just as it was before GE arrived. A clean river is our right, we should accept no less, and I urge those who agree to send their comments to the EPA by September 1st.”

From 2009 to 2015, General Electric funded dredging along a 40-mile section of the Upper Hudson River above the Troy dam, with the goal of remediating the damage caused by decades of dumping toxic PCBs into the river. This was done in accordance with a Record of Decision from the EPA to which GE agreed in 2002 after decades of resistance. 200 miles of the Hudson River, from Hudson Falls to the tip of Manhattan, is classified by the EPA as a Superfund Site – the largest in the US.
On June 1st, the EPA issued a Five-Year Review in which it determined that, although PCB levels are not yet protective of human health, no further remediation is required beyond natural attenuation. However, natural attenuation will require at least 50 years before it will be safe to eat fish from the river once a week, and two other federal agencies, NOAA and USFWS, have issued findings suggesting it will take much longer.
###

We write to you as the elected representatives of millions of New Yorkers living along the banks of the Hudson River and beyond. Our constituents look to the Hudson as a vital economic, recreational, and cultural resource, part of the heritage of all New Yorkers and all Americans. As stewards of that heritage, we urge you to revise the second Five-Year Review of the Hudson River PCBs Superfund Site to declare that cleanup efforts completed thus far are not protective of human health and additional remediation and evaluation is required to restore the river and meet the goals set out in the Record of Decision.

Although dredging of PCB-laced sediment in the Upper Hudson was effective at removing PCBs from the riverbed, data has shown that two to three times as many PCBs remain in the river as expected. Additionally, PCB levels in the Lower Hudson, between the Troy Dam and the tip of Manhattan, have not demonstrated expected declines resulting from Upper Hudson dredging. According to EPA’s own analysis, it will be over 50 years before it will be safe for New Yorkers and visitors to eat fish from the Hudson once a week without negative health effects. Two of EPA’s sister agencies, NOAA and USFWS, have issued a study suggesting natural attenuation will take even longer.

It is simply unacceptable that New Yorkers may have to wait decades, and possibly several generations, before the Hudson River can be considered safe as a result of natural attenuation. Unless further action is taken, many of us, and even some of our children, will not live to see that time. General Electric alone is responsible for causing this extensive damage to the river, its people, and its economic productivity. Now it is up to the EPA to require GE to do whatever is necessary to make the river whole. The first step is for the Five-Year Review to reflect the reality that the cleanup has not achieved its objectives, and require further dredging of the Upper Hudson and further investigation of the Lower Hudson.

Thank you for the opportunity to comment, and for your serious consideration of our concerns.