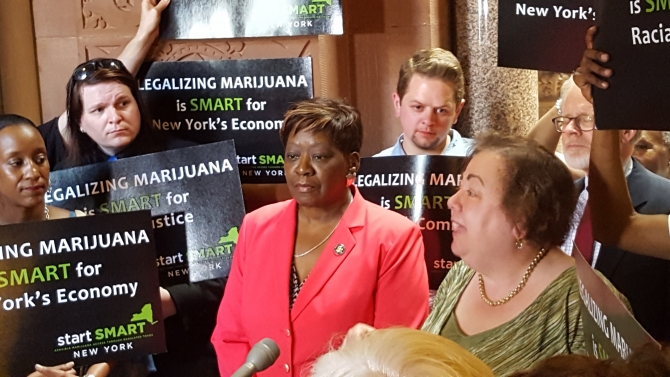 New York – Today, in an op-ed published in the Albany Times Union, Senator Krueger and Assembly Member Crystal Peoples-Stokes argue that New York should end the failed approach of marijuana prohibition, and enact rational drug policy through the Marijuana Regulation and Taxation Act. Full text of the op-ed can be read below.

When we first drafted and introduced the Marijuana Regulation and Taxation Act in 2013, we knew the fight for marijuana reform in New York had a long way to go.

Marijuana prohibition enforcement was at an all-time high, with over 50,000 New Yorkers arrested annually statewide for low-level possession. Colorado and Washington State had yet to implement legalization, and very few legislators were willing to publicly support what many believed to be a fringe issue. At that time, New York didn’t even have a medical marijuana program.

New York has made some progress since then, but each step of the way prohibition has limited the effectiveness of piecemeal reforms. The state’s medical marijuana program has proven to be incredibly restrictive and virtually inaccessible to poor people and the middle class. And while low-level marijuana possession arrests have dropped in recent years due to pressure from advocates, the dramatic racial disparities in arrests persist. Last year, more than 80 percent of those arrested for low-level possession were Black or Latino.

New York has taken incremental steps to reform its marijuana policies, but as long as prohibition remains the communities most harmed are people of color and the poor. Since 1996, there have been more than 800,000 arrests for possession of small amounts of marijuana in New York, over 700,000 by the NYPD alone, making it marijuana possession one of the top arrests in the state.

Meanwhile, we see a bright alternative in the eight states and the District of Columbia that have now ended marijuana prohibition. National support for ending marijuana prohibition stands at 60 percent, and currently 1 in 5 adults in the U.S. can access marijuana legally. The sky hasn’t fallen in Colorado, Washington, Oregon, Alaska, Massachusetts, Maine, Nevada, California, and Washington D.C. following their implementation of legal marijuana markets. Instead, Colorado is using marijuana tax revenue to build schools — while New York closes them down. We are updating the MRTA because we, too, believe there is a better way.

Marijuana prohibition simply does not make sense for New York. It’s a drain on state resources that has been ineffective in deterring use, restricting access, or promoting public health —goals that are much more achievable under a regulated market. More crucially, prohibition has played an unacceptable role in devastating communities of color and skewing our criminal justice system.

Our revised bill is significant because it recognizes where we are as a state and a society. It incorporates the lessons other states have learned while still centering the initial goals that we laid out when we first introduced this legislation in 2013: to end the racially biased enforcement of marijuana prohibition and center fairness and equity in our criminal justice system — all while generating millions in revenue to rebuild communities.

We hope New Yorkers will join us in calling for an end to marijuana prohibition by joining the Start SMART campaign to provide Sensible Marijuana Access through Regulated Trade here in New York through the new and improved Marijuana Regulation and Taxation Act. We need to end prohibition and place New York at the forefront of rational drug policy.

Senator Liz Krueger and Assemblymember Crystal Peoples-Stokes serve in the State Legislature are the co-sponsors of the Marijuana Regulation and Taxation Act.