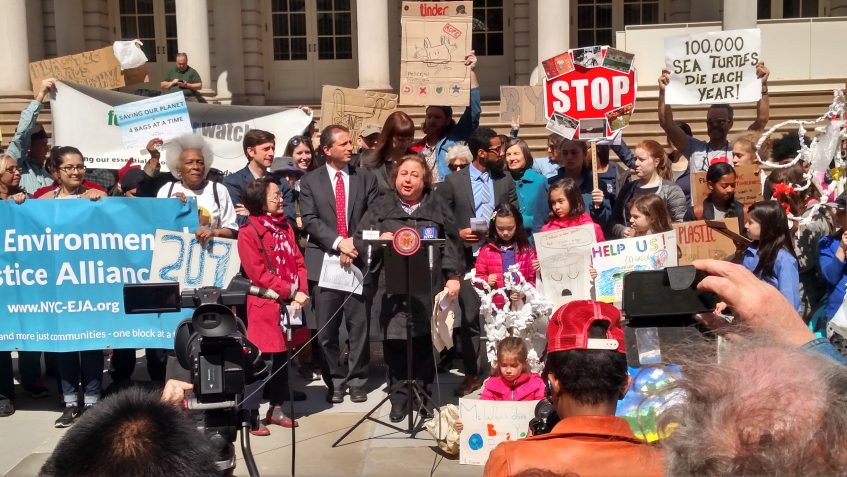 New York – Today, in an op-ed published in the New York Daily News, Sen. Liz Krueger called for a statewide ban on plastic carryout bags, with a 10-cent fee on all other carryout bags.

As Earth Day approaches, we are reminded once again that we share this tiny, crowded blue dot with over 7 billion other people (not to mention many animals and plants). It is likely the only place we will ever call home. Yet for years, our throwaway culture has treated the Earth as if it is disposable. As a result, the planet is reaching a crisis point, and climate change is not the only threat we face.

There is another human-caused ecological disaster building. The problem? One word: plastics.

By now, it is almost common knowledge that we are choking ourselves with plastic pollution. The Great Pacific Garbage Patch, covering an area nearly twice the size of Texas, is only one of many such collections of debris floating in our oceans.

According to an estimate by the World Economic Forum, if we continue at our present rate, by 2050 there will be more plastic in the ocean than fish. And if that isn’t enough to give you cause for concern, consider that much of that plastic will eventually make its way up to the top of the food chain and into our bodies.

Although we have made a pretty big mess, it is not too late to clean it up. By taking concerted action, we can reduce the amount of plastic waste we create and discard.

Here in New York, we can and must do our part by ending the use of plastic carryout bags. Yes, they are a small part of a big problem. But only by acting locally, can we begin to make a difference globally. That is why I have joined my colleagues, state Sen. Brad Hoylman and Assemblyman Steve Englebright, in introducing a statewide bill to ban these bags.

I understand the resistance from people who consider them an important convenience. But there are readily available alternatives that do far less harm to the environment.

Every year, New Yorkers are responsible for using more than 23 billion plastic carryout bags, nearly one quarter of the 100 billion bags used and discarded nationwide. It’s a stunning number.

That’s more than 1,000 bags per year for every man, woman and child in our state. And the vast majority of those bags are used for an average of 12 minutes , then sent to landfills.

However, many bags do not make it that far, instead getting stuck in trees, clogging storm drains, getting caught in recycling equipment and fouling our waterways. As Gov. Cuomo has said, “the costly and negative impact of plastic bags on New York’s natural resources is a statewide issue that demands a statewide solution.”

Our legislation would ban plastic carryout bags, while placing a 10-cent fee on other carryout bags, with the goal of encouraging New Yorkers to switch to reusable bags. Don’t worry, we’re not interested in having food leak on the sidewalk or in your trunk: In-store plastic bags, such as produce, meat and bulk food bags are exempt, as are carryout bags provided by restaurants.

Stores would keep a small portion of the fee to defray their costs, with the bulk of the money collected going to the state Environmental Protection Fund, to be made available to localities for pollution reduction, cleanup and education, and reusable bag distribution, with priority given to low- and fixed-income communities.

This kind of ban/fee hybrid legislation has been in place statewide in California since 2016, and it accords with the recommendations made by Cuomo’s Plastic Bag Task Force. Hundreds of towns, counties, states and countries around the world have enacted some combination of bans or fees on plastic bags, including more than a dozen localities here in New York.

In fact, more than 1.6 million New Yorkers already live in areas covered by a patchwork of bans and fees. They are a proven solution, reducing bag waste by up to 90% with very little impact on people’s daily lives.

We have a responsibility to protect our quality of life, not just for ourselves, but for our children and grandchildren. That means ensuring that our trees and sidewalks are not strewn with plastic bags, that our rivers and streams are not degraded by plastic pollution and that the food we eat is not poisoned by the residue of our own plastic waste. More than a year ago, Cuomo promised a statewide solution. No action has been taken yet. There is no reason to wait any longer.

Let’s not let another Earth Day pass without showing that New Yorkers can clean up our act. Let’s bag the bags.