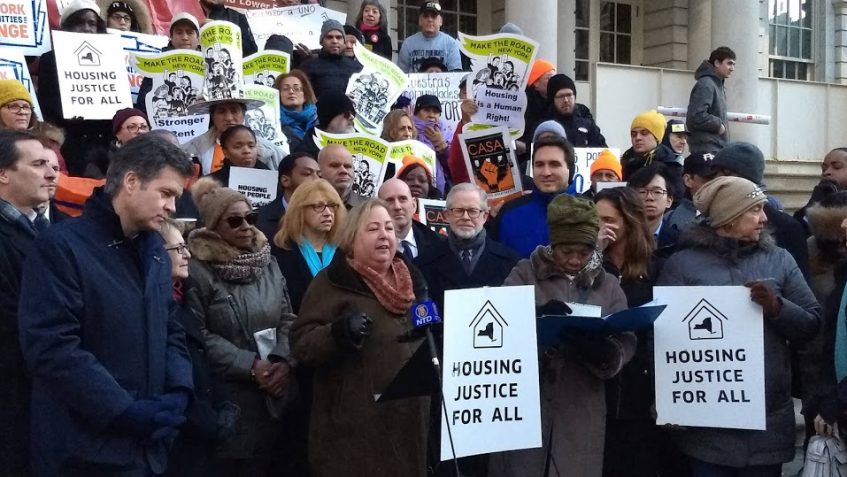 by admin in Home Page, News
Albany – Today the State Senate Committee on Social Services, chaired by Senator Roxanne Persaud, voted to move S.2375/A.1620, a bill to create the Home Stability Support program, which would be a new statewide rent supplement for New Yorkers facing homelessness. The bill is sponsored by Senator Liz Krueger, Chair of the Senate Finance Committee, and Assemblymember Andrew Hevesi.

“Homelessness in New York is both a humanitarian crisis and an ongoing stress on local budgets and communities,” said Senator Krueger. “We have to tackle this problem head-on, and the best way to start is by keeping people in their homes in the first place. Home Stability Support will be a lifeline for thousands of New Yorkers to avoid falling into the cycle of homelessness, and it will also save millions of dollars for towns, counties and cities throughout the state. The sooner we get this done, the sooner we can start bending the curve on homelessness in New York.”

“I am extremely grateful to have such a strong partner in Senator Liz Krueger, under her leadership Home Stability Support now has 26 Senate co-sponsors and has successfully moved out the Social Services Committee,” said Assemblymember Hevesi. “I look forward  to continuing to work together and fight for HSS to become a reality this year.”

There are currently over 250,000 homeless New Yorkers in the state each year, and the number is increasing. According to the most recent city and state reports, last year 23,000 more people became homeless than escaped homelessness in New York. 3 out of 5 homeless New Yorkers are school-aged children, a number that has grown by 69% since 2011. More than 80,000 households across the state are on the brink of homelessness.

Home Stability Support (HSS) will be a new statewide rent supplement for families and individuals who are eligible for public assistance benefits and who are facing eviction, homelessness, or loss of housing due to domestic violence or hazardous living conditions. HSS will be phased in over five years, will be 100% state-funded, and will replace all existing optional rent supplements. New York City Comptroller Scott Stringer has estimated that over a ten year period, HSS could reduce the shelter population in the city by 80% among families with children, 60% among adult families, and 40% among single adults.

“The growing number of homeless New Yorkers — a significant portion of whom are youth  — is heartbreaking,” said Senator Persaud. “Preventing individuals and families from falling into the vicious cycle of homelessness through the Home Stability Support Program is the first step to reversing this crisis.”

The HSS rent supplement will bridge the difference between the current shelter allowance and 85% of the fair market rent determined by HUD. Local districts will have the option to further raise the supplement up to 100% of the fair market rent at local expense. Roughly 80,000 households would be eligible initially, including: those who are homeless in a shelter, on the street, or doubled-up living in another household; approximately 3,000 households fleeing domestic violence or living with hazardous conditions in their homes; approximately 7,000 households on public assistance facing eviction; and households presently receiving a rent supplement.