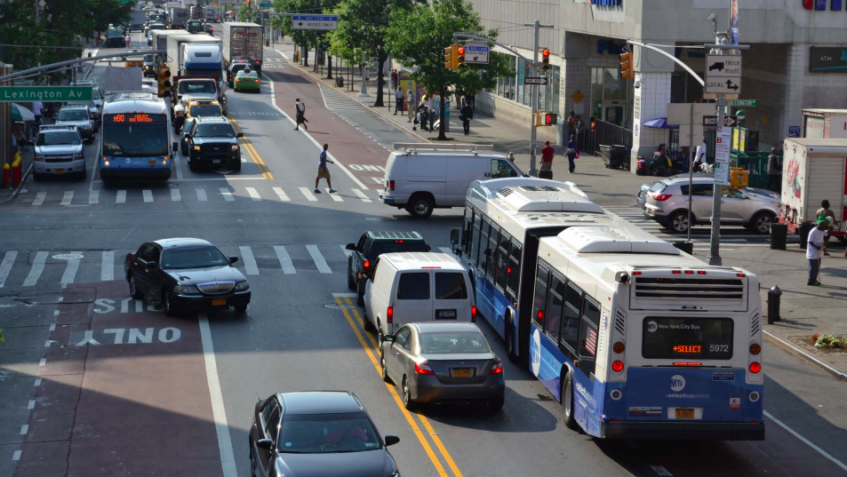 Albany – State Senators Liz Krueger and Martin Malavé Dilan and Assemblymember Harvey Epstein announced the introduction of a bill designed to address congestion and improve bus service while also enhancing public safety. The legislation (S8597/10882) removes caps on automated enforcement cameras for bus lanes and traffic lights in the city of New York and makes these programs permanent.  The legislation also creates a graduated schedule of fines for repeat offenders and directs revenue from fines to the Metropolitan Transportation Authority (MTA).

“New York State needs ensure that New York City has reliable public transportation and that the City has the necessary tools to improve traffic safety and reduce congestion,” said Senator Krueger. “This legislation removes restrictions on existing traffic-enforcement programs camera programs that serve to limit their effectiveness while also generating desperately needed revenue for the MTA.”

““Transportation policy needs to reflect the impact it has on people’s lives. It is as much about public safety, public health and finance, as it is the ability to get from one place to another reliably and safely. A breakdown in any one of its many interconnected parts, echoes thorough out. The responses and solutions need to be quicker and closer to home. If camera’s can calm dangerous intersections, they should be installed. If city transit has a bus revitalization plan, it requires enforcement. If fines can fund transit investments, they should. We need to protect people, and keep them moving, quicker,” said Senator Dilan.

“As a parent, it’s important to me that the streets surrounding our kids’ schools are as safe as possible. Speed cameras have proven to be an effective way to safeguard streets and there’s no reason why New York City shouldn’t have the ability to expand these already successful traffic-enforcement programs,” said Assemblymember Epstein.

S8597/A10882 would allow the city of New York to expand the use of bus lane and red-light camera enforcement programs as it sees fit and frees New York City police resources to be directed toward more serious crime. It also raises the maximum fine from a red-light camera from $50 to $100 and institutes a graduated fine schedule for repeat offenders of both bus lanes and red lights to provide as an added deterrent for these offenses. Finally, this law directs the funds raised by the fines from these cameras to the general transportation account of the New York City transportation assistance fund established in the 2018-19 budget to provide additional revenue to the Metropolitan Transportation Authority.

The New York City Department of Transportation (DOT) and the MTA have both released plans for improving bus service that include expanded use of bus lanes and bus lane enforcement cameras along more bus routes in the city. However, state law currently limits the use of bus lane enforcement cameras to just 16 bus routes in the city. NYC DOT has installed additional bus lanes beyond the designated 16, but lacks the ability to enforce them with cameras, limiting their effectiveness as drivers often violate them with impunity.

State law also authorizes the city of New York to install “traffic-control signal photo violation-monitoring devices,” also known as “red-light cameras,” but limits their use to one hundred and fifty intersections in the city. Red light cameras are a critical element of the city’s “Vision Zero” initiative to reduce traffic fatalities via street redesign, lower speed limits, promotion of safe driving, and increased traffic law enforcement.

Another critical part of Vision Zero, the city’s school-zone speed camera program, is set to expire this year unless the legislature and Governor act to renew the program.  Senators Krueger and Dilan and Assemblymember Epstein all cosponsor S 6046-C / A7798-C (Peralta / Glick) which would expand this critical program and make it permanent.