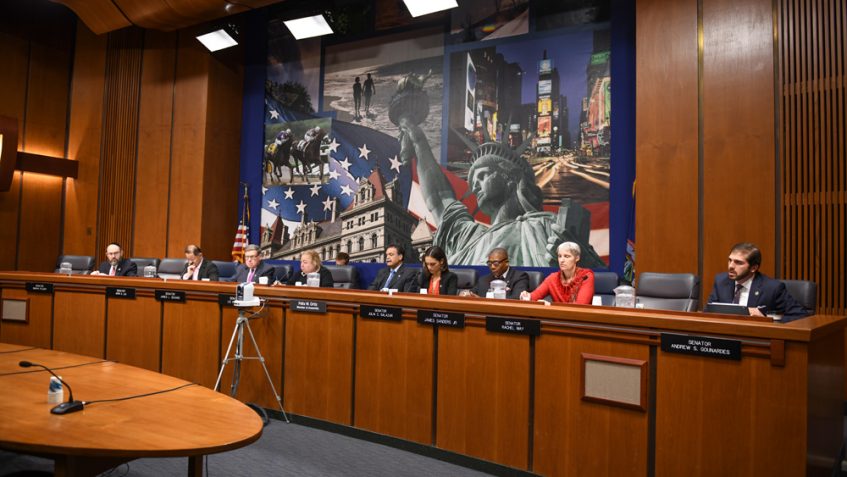 by admin in Home Page, News
Albany – Today State Senator Liz Krueger, Chair of the Senate Finance Committee, and Assembly Assistant Speaker Félix W. Ortiz, along with other Senators, held a hearing on divesting the New York State Common Retirement Fund from fossil fuel holdings. Discussion centered around the Fossil Fuel Divestment Act (S.2126/A.1536). Video of the hearing, as well as copies of written testimony, will be available here.

“Climate change is the single greatest threat facing humanity; the only rational response is to use every tool at our disposal to prevent and mitigate its most catastrophic impacts,” said Senator Krueger. “Divesting our state pension fund from fossil fuels will protect workers and retirees from the rapid loss of valuation that fossil fuel companies will suffer in the coming energy transition. It will also send a powerful message that it is no longer acceptable to invest in a business model that puts our entire planet at risk. The climate crisis is here – fiduciary and moral responsibility require the process of divestment to begin now.”

“It has become painfully clear that while people have created climate change, we can also provide solutions,” said Assistant Speaker Ortiz. “For years, state funds have been invested in large fossil fuel corporations that pollute our planet. It’s time to divest those funds and invest them into companies that nourish our planet. We have an obligation to protect our environment for future generations; we cannot delay any more. Corporations that continuously pollute the earth breathe no air, have no heart, and will always choose profits over people. They should not be rewarded or supported by New York State funds.”

Among those testifying at the hearing were:

Members of the Decarbonization Advisory Panel for the Common Retirement Fund

The Fossil Fuel Divestment Act (S.2126/A.1536) would require the State Comptroller to divest the New York State Common Retirement Fund from all holdings in the 200 largest publicly traded fossil fuel companies, as defined by carbon content in the companies’ proven oil, gas, and coal reserves (the CU 200). Divestment from coal companies would be completed within one year; divestment from all other fossil fuel companies would be completed within five years. Currently, ExxonMobil represents the largest single CU200 holding in the CRF, with around $1 billion invested.

Worldwide there are currently 1,055 institutions that have committed to divest, including universities, faith-based organizations, non-profits, municipalities, philanthropic organizations, and national and state pension funds, controlling $8.73 trillion in assets. In 2018, Ireland became the world’s first nation to fully divest its $10.4 billion sovereign wealth fund from fossil fuels.