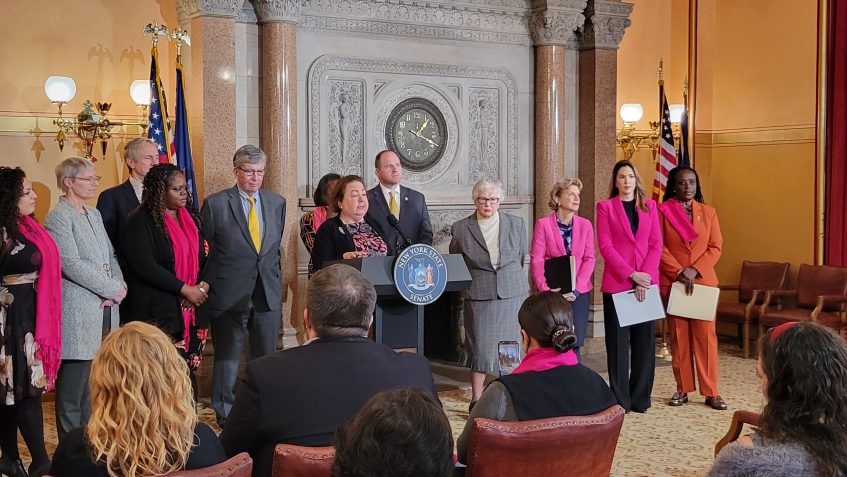 Albany – On Tuesday, January 24th, the State Senate and Assembly passed for the second time a proposed Equal Rights Amendment to the State Constitution. The amendment, S.108/A.1283 sponsored by Senator Liz Krueger and Assembly Member Rebecca Seawright, will extend current constitutional protections against discrimination to several new protected classes, as well as protecting access to contraception and abortion.

“Days after what would have been the 50th anniversary of Roe, we are affirming yet again that we will not allow New Yorkers to be pulled backward, we will not allow the progress we have made on reproductive freedom to be undone,” said Senator Krueger. “Women have waited far too long to be included in our State Constitution, but so have LGBTQ people, people with disabilities, Latinos, and everyone who has faced discrimination based on characteristics that are beyond their control. The 1930s-era equal rights language in our State Constitution is long overdue for an update to ensure that equal rights are for everyone. I am proud that today we will send this amendment to the people.”

“We have witnessed the obliteration by our nation’s highest judicial tribunal of fifty years of federal protection of the rights of women to determine the future of their bodies,” said Assembly Member Rebecca Seawright. “As the federal courts turn the clock back on Civil Rights, Human Rights and Voting Rights, we cannot and must not stand by while freedom of choice and freedom from discrimination are so outrageously denied. We are closer than ever to enshrining a woman’s right to choose and equality protections against discrimination in the most important governing document of our state. Now the voters will have the opportunity to vote for equality on the ballot in November 2024.”