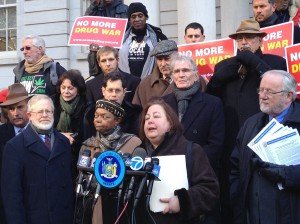 Joined by a broad spectrum of drug law reform advocates and fellow elected officials, State Senator Liz Krueger (D-Manhattan) announced that she will be introducing the Marijuana Regulation and Taxation Act (MRTA) today. The legislation would legalize, regulate, and tax marijuana under state law along lines similar to the state’s current system regulating alcohol, and would represent a new approach for New York State after decades of costly, counterproductive policies that have produced racially discriminatory outcomes.

“Prohibition of marijuana is a policy that just hasn’t worked, no matter how you look at it, and it’s time to have an honest conversation about what we should do next,” said Sen. Krueger. “The illegal marijuana economy is alive and well, and our unjust laws are branding nonviolent New Yorkers, especially young adults, as criminals, creating a vicious cycle that ruins lives and needlessly wastes taxpayer dollars. Worst of all, this system has resulted in a civil rights disaster: African Americans are dramatically more likely to be arrested for pot possession than whites, despite similar rates of marijuana use among both groups.”

Wasted Resources, Discriminatory Effects
In New York, more than 97 percent of marijuana arrests are just for possession, and in 2010, there were more than 100,000 of these arrests in New York State. The Bronx has the fourth highest per-capita arrest rate for marijuana possession of any county-level jurisdiction in the country.

“On their face, the racial disparities in these statistics represent a grave injustice, while the sheer volume of arrests shows just how gross a waste of city and state resources our current policy has become. We’re spending taxpayer money to ruin lives, disproportionately for those from communities of color, with no real public policy goal to be found in any of it,” said Sen. Krueger.

The Thriving and Violent Illegal Drug Market
While Sen. Krueger rejected arguments that marijuana prohibition is desirable, she also pointed out that law enforcement operating under the current law has not been able to make a significant dent in the sale of marijuana in the United States. Meanwhile, the domestic and international criminal organizations that thrive on the illegal drug trade have only become more frightening. Legalization and regulation, she argued, should therefore be seen as a practical alternative whose time has come, even from the perspective of those who would otherwise prefer marijuana remain illegal.

According to 2012 census data, New York State’s population is about 19.6 million, with aabout 15.3 million age 18 or older. The federal Substance Abuse and Mental Health Administration (SAMHSA) estimates 12.2 percent of the state population, or approximately 1.9 million New Yorkers, have used marijuana in the past year. If based on the City Comptroller’s estimate of per capita adult consumption and data on current marijuana prices, the New York State marijuana market could represent as much as a $3 billion industry.

The Marijuana Regulation and Taxation Act
The legislation Sen. Krueger is filing today would regulate marijuana in a manner similar to New York’s current treatment of alcohol, and would empower the State Liquor Authority to act as the primary regulatory agency. In brief, the bill:

Quotes from State Elected Officials, Advocates, and Experts
“From decriminalizing marijuana possession and use, to creating regulatory taxes that will fund re-entry, substance abuse, job training and other rehabilitative programs, this comprehensive legislation represents a progressive step in a necessary direction,” saidSen. Velmanette Montgomery (D-Brooklyn), noting that 20 states and the District of Columbia now have laws legalizing marijuana in some form. Montgomery, who is also the sponsor of a bill to legalize marijuana for medical use, noted that Senator Krueger’s proposal goes far to generate tax revenue and economic opportunities while reducing drug enforcement costs.

“We need to move from a dysfunctional prohibition model to the tax and regulate approach,” said Assembly Health Committee Chair Richard N. Gottfried (D-Manhattan). “Marijuana is nowhere near as potentially harmful as alcohol. Our law is dishonest, and that undermines our message to young people. This is a completely separate issue from allowing medical use of marijuana under a doctor’s supervision, for which I have been advocating. Both laws are the right thing to do.”

“There is no question New York’s marijuana policies are behind the times. For decades we have modified the particulars of use or possession bit by bit, and this piecemeal legislating has never gotten to the root of the overabundance of unnecessary incarcerations or the realities of marijuana use statewide. Today there is little doubt that the public’s perception, and consumption, of marijuana has changed drastically. It is time that New York’s laws reflect that fact,” said Sen. Martin Malavé Dilan (D-Brooklyn).

“When you look around inner city neighborhoods, it is clear that the ‘War on Drugs’ in the context of marijuana has failed to do much more than incarcerate two generations of youth,” said Sen. Kevin Parker (D-Brooklyn). “The massive amounts of money diverted to criminalizing and punishing marijuana users is money we should direct into afterschool programs, fully funding our children’s education, and youth development programs. Sen. Krueger’s bill, with a ‘local option’ based on existing State Liquor Authority law, is one way for us to abandon this broken paradigm and look for new solutions to drug use.”

“It is time to realize that the War on Drugs has been ineffective. We need to look at other options regarding marijuana laws,” said Assemblymember Luis Sepulveda (D-Bronx). “As a result of today’s marijuana laws, we see a greater number of arrests in communities of color. This bill will allow the police to focus on more severe crimes as well as creating a new source of revenue for the state.”

“For too long our policies concerning marijuana have been saddling thousands of New Yorkers, in particular minorities, with criminal records and costing tax payers millions of dollars,” said Sen. Gustavo Rivera (D-Bronx). “I commend Senator Krueger for introducing a bill that creates a comprehensive system for regulating marijuana that will generate revenue for the state, while creating a more just criminal justice system for communities of color.”

“I commend Senator Krueger for her courage to initiate an open and honest debate about the criminalization of marijuana, which disproportionately impacts people of color, young, and low-income New Yorkers,” said Sen. Brad Hoylman (D-Manhattan). “Legalizing possession and personal use of small amounts of marijuana would eliminate disparities in marijuana arrests and permit our criminal justice system to more effectively deploy scarce resources.”

Dr. Carl Hart, associate professor of psychology at Columbia University, commented: “As a neuropsychopharmacologist who has spent the past fifteen years studying the neurophysiological, psychological and behavioral effects of marijuana, I can tell you that the claims about the harms associated with marijuana use have been greatly exaggerated in the media. Far greater harm results from arresting people for marijuana possession and the racial disparities of those arrests.”

“Being arrested for marijuana possession isn’t a mere inconvenience. It can have long-lasting consequences for employment, housing, child custody and other areas of a person’s life,” said Alfredo Carrasquillo, VOCAL’s Civil Rights Organizer. “These arrests have led to hundreds of millions of dollars in policing and court costs and incalculable damage to the lives of hundreds of thousands of New Yorkers, mostly Black and Latino youth, who have been unlawfully arrested under the Bloomberg administration.”

“New Yorkers are fed up with our current failed system,” said Howard Josepher, the founder and President of Exponents, a drug treatment program. “We may not all be ready to embrace legalization, but we are ready for a meaningful discussion about real alternatives to what we are currently doing. Marijuana prohibition doesn’t prevent use; it just makes criminals out of young people of color and the seriously ill who use marijuana to treat conditions like cancer, multiple sclerosis, and HIV/AIDS.”

“My 26 years in law enforcement, including 14 in narcotics, taught me that prohibition is the true cause of much of the personal and communal damage that has historically been attributed to drug use,” commented Jack Cole, a retired Detective Lieutenant with the New Jersey State Police and co-founder of Law Enforcement Against Prohibition (LEAP). He noted, “In a regulated and controlled environment, marijuana will be safer for adult use and less accessible to our young people, we can curtail the crime associated with the illicit market, and law enforcement can focus its resources on more serious crimes.”

“New York has led the way on important issues through history, including being the first state in the nation to repeal alcohol prohibition.” said Evan Nison, Co-Founder and Director of NY Cannabis Alliance. “Now Senator Krueger is helping assure New York retains its position as a leader by offering a new approach to our failed marijuana policies. We hope legislators show foresight by passing this historic piece of legislation this session.”

“New York State prohibited the sale of marijuana 76 years ago. Three quarters of a century of this failed public policy is long enough,” said Douglas Greene of Empire State NORML. “Prohibition forces responsible consumers to channel billions of dollars in profits to criminals and allows law enforcement to disproportionately criminalize our communities of color. It’s time to start the conversation about a progressive new approach to marijuana. It’s time to tax and regulate marijuana.”

“Marijuana prohibition has a disproportionately large impact upon young people with consequences that include not only arrest, but also denial of federal student financial aid,” said Devon Tackels of Students for Sensible Drug Policy. “This sensible drug policy will enable law enforcement to focus on real crimes and stop the arrest of otherwise law-abiding citizens. Students for Sensible Drug Policy is proud to be among those who support this policy, and look forward to its implementation.”

Sen. Krueger is a veteran member of the New York State Senate’s Democratic Conference, serving as ranking member on the Senate Finance Committee. First elected in 2002, Sen. Krueger represents Manhattan’s Upper East Side and East Midtown communities. Before her election, Sen. Krueger served as Associate Director of the Community Food Resource Center and was the founding Director of the Food Bank for New York City. She is a nationally respected expert on the problems of hunger and homelessness.