0
by admin in Community, Home Page

Earlier last month, Senator Liz Krueger nominated Elsbeth Reimann for an Our Town Thanks You (OTTY) award. Ms. Reimann was honored by Our Town. Below is the article on her service to the community.

Retired, But Not Retiring

“I have more than one accent,” says 76-year-old Elsbeth Reimann. “I speak German better than French, but when I speak French I was told I have an American accent.” Born and raised in an orphanage in Switzerland, Reimann had two dreams—to see the world, and to be educated. She achieved both on her own and has also dedicated her life to supporting the social progress of New York City.

Reimann came to New York City in 1968, and put herself through high school equivalency training, followed by college at John Jay College of Criminal Justice. She met Assembly Member Pete Grannis in 1975, the year after he was elected, and began volunteering at his office. Ten years later Reimann went on the payroll as Grannis’ community liaison, listening to the concerns of community members and bringing them to his attention. Reimann worked for Grannis until 2007, when she retired, but her work in the community didn’t end there. She maintained her level of involvement with housing issues, and continued to attend community meetings.

Sen. Krueger’s Virtual Roundtable for Boomers and Seniors Session VII – Technology Can Work For You 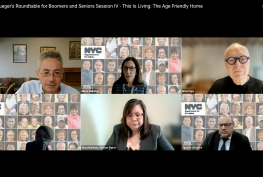 Sen. Krueger’s Roundtable for Boomers and Seniors, Session IV – This Is Living: The Age Friendly Home