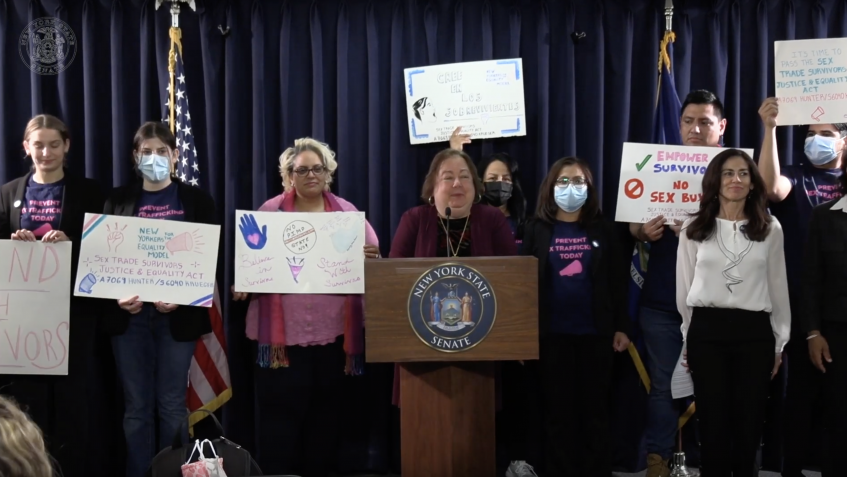 by admin in News

(Albany) – On Tuesday, May 10th, 2022, at 1:30 pm, Senator Liz Krueger, Assembly Member Pamela Hunter and allies held a press conference in support of the Sex Trade Survivors Justice and Equality Act. This legislation would be an additional tool to prevent sex trafficking in New York. Partial decriminalization calls for the end of arrests and incarceration of people engaged in prostitution. It offers the exit and support services they need, while still holding to account pimps, brothel owners, traffickers, sex buyers and exploiters.

1. Decriminalize people in prostitution, repeal the crime of selling sex, prevent people in the sex trade from being charged as an accomplice to promoting or compelling prostitution when they are helping others also in prostitution without profiting, prohibit the usage of condoms as evidence in criminal trials for prostitution.

2. Expand access to comprehensive social services, extendthe legal protections and comprehensive services afforded to minors arrested for prostitution under New York’s Safe Harbor law, to cover young adults up to age 24, enable a broader pool of people to access social services from organizations combating gender violence by aligning New York’s definition of human trafficking with the federal definition, create a regionally, racially, and sexually diverse State task force with representation from people in the sex trade and advocates, to ensure access and administration of social services to people in prostitution across New York.

3. Strengthen laws against trafficking, while laws that hold accountable pimps, sex traffickers, and other profiteers remain unchanged. Eliminate a loophole in NY state law that prevents sex buyers from being charge with “promoting prostitution” when they traffic people to themselves, strengthen protections for children by eliminating an “ignorance defense” afforded to those who buy sex from children under 11 (1st degree), 15 (2nd degree), or in a school zone.

4. Advance criminal justice reformby clearing survivors’ records for crimes committed while under the control of their exploiter, automatically expunge all past charges for prostitution and loitering for the purpose of prostitution, address the over-incarceration of people of color and implicit bias in law enforcement by penalizing the misdemeanor crime of buying sex with a fine (instead of jail) and utilizing an income-based fine scale to incentivize law enforcement to target buyers with disposable income. A portion of these fines will be directed to a victims’ compensation fund.