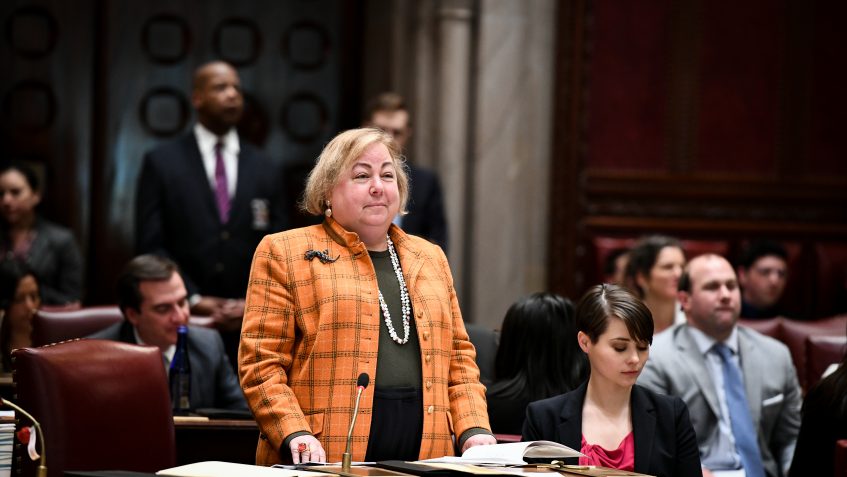 Albany –  The Senate Democratic Majority today passed legislation (S.2450-A and S.35) that will create stronger regulations for the safe storage of firearms and the appearances of imitation weapons to prevent unintentional gun violence. Senator Liz Krueger and Senator Brad Hoylman sponsored the bills.

Bill Sponsor Senator Liz Krueger said, “Our primary responsibility as legislators is to keep New York families safe. It’s simply common sense that young children should not have unsupervised access to dangerous weapons, and no responsible gun owner would disagree. Too many times, we have seen the tragic results when kids get their hands on guns. These tragedies are preventable, and today we took an important step that will save lives and keep families whole.”

“Protecting New York children from gun violence is a top priority for the Senate Democratic Majority,” Senate Majority Leader Andrea Stewart-Cousins said. “I commend Senator Brad Hoylman and Senator Liz Krueger for introducing these bills that will help prevent future tragedies by ensuring guns are stored safely in homes with children and that imitation guns are easily distinguished from real guns. The Senate Majority will continue to take action to protect New Yorkers from gun violence.”

Bill Sponsor Senator Brad Hoylman said, “Since 1994, there have been at least 63 shootings in New York State because of toy or imitation guns. Police say it’s virtually impossible to train officers to identify imitation guns from a distance. That’s why it’s important that we stand up to gunmakers and the National Rifle Association and pass my bill that would require toy guns be distinguishable from the real thing. Hopefully, with the bills we pass today on toy guns and safe storage, we’ll save a lot of heartache later for New York families later. I’m grateful to Senate Leader Andrea Stewart-Cousins for continuing to make gun safety a priority.

The gun safety legislation advanced by the Senate Majority include:

·         Senate Bill S.2450A, sponsored by Senator Liz Krueger, will establish penalties for anyone who has a child under 16 in their home and who doesn’t properly store any firearm or render it incapable of being fired by using an appropriate gun-locking device.

·         Senate Bill S.35, sponsored by Senator Brad Hoylman, will require that imitation weapons must be entirely brightly colored or be constructed entirely of transparent or translucent materials, and be manufactured with other identifying features.