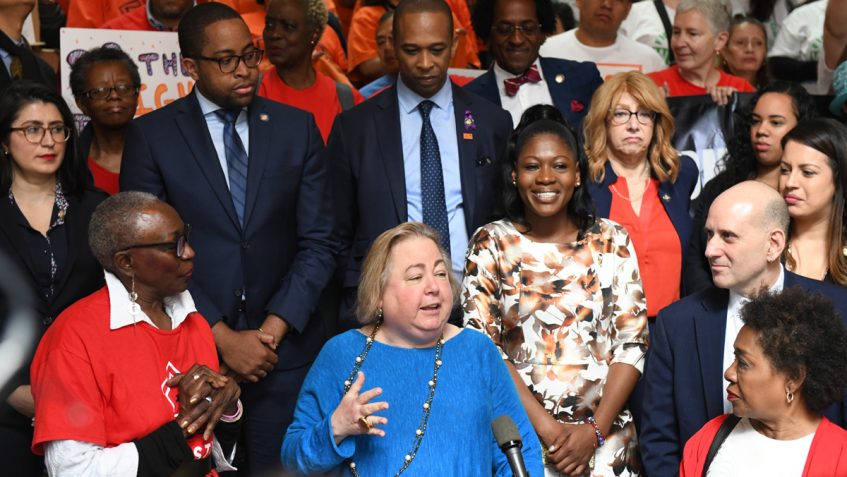 Albany – The Senate Democratic Majority today passed the Housing Stability and Tenant Protection Act of 2019, the strongest affordable housing and tenant protections legislation in state history. This legislation, a 2-way agreement with the State Assembly Majority, was drafted following multiple legislative hearings throughout the state and discussions with advocates, tenants, and stakeholders. This legislation will make these new pro-tenant regulations permanent, repeal vacancy deregulation, reform rent increases for major capital improvements, create transformational protections for all tenants throughout the state, and empower qualified communities outside of New York City to opt into rent stabilization.

“Before I ran for the Senate, I had dedicated my career to helping tenants fight eviction,” said Senator Liz Krueger. “I was recruited to run in 2002 with exactly this bill in mind, because I knew that the people I was trying to help would never be secure in their homes unless we fixed our broken rent regulations. I’ve won and lost many important battles over the last 17 years. But today may be the most rewarding day of my political career. I’m so proud to be part of a united Democratic Majority that has delivered these historic protections to help New York families stay in their homes.”

“We made a commitment that the new Senate Democratic Majority would help pass the strongest tenant protections in history,” Senate Majority Leader Andrea Stewart-Cousins said. “The legislation we passed today achieves that commitment and will help millions of New Yorkers throughout our state. I thank my partner in legislative leadership, Speaker Carl Heastie and the Chair of the Senate’s Housing, Construction and Community Development Committee, Senator Brian Kavanagh for his leadership on this issue. I also want to recognize and thank Senator Zellnor Myrie and the members of the Senate Democratic working group which helped draft and advance this historic affordable housing legislation.”

The Senate Majority held a series of hearings across New York State, led by Chair of the Committee on Housing, Construction and Community Development, Senator Brian Kavanagh, on rent regulation and tenant protections so that the final legislation would reflect the perspectives of a wide range of stakeholders. Hearings were held in Syracuse, New York City, Albany, Newburgh, and Greenburgh. The hearings provided an opportunity for tenants, property owners, stakeholders, and New Yorkers from around the state the opportunity to provide testimony and discuss affordable housing concerns directly with their State Senators.

The Housing Stability and Tenant Protection Act of 2019, Senate bill S.6458, will make the rent regulation system and tenant protection initiatives permanent, rather than having them sunset as was the policy in the past. This legislation also repeals high-rent vacancy deregulation as well as “vacancy bonus” and “longevity bonus” provisions. This omnibus bill also reforms potential rent increases for major capital improvements and for individual apartment improvements to better protect tenants. Additionally, this historic affordable housing legislation extends certain tenant protections statewide, implements protections for mobile and manufactured home tenants, and empowers qualified localities throughout the state to implement the rent stabilization system.