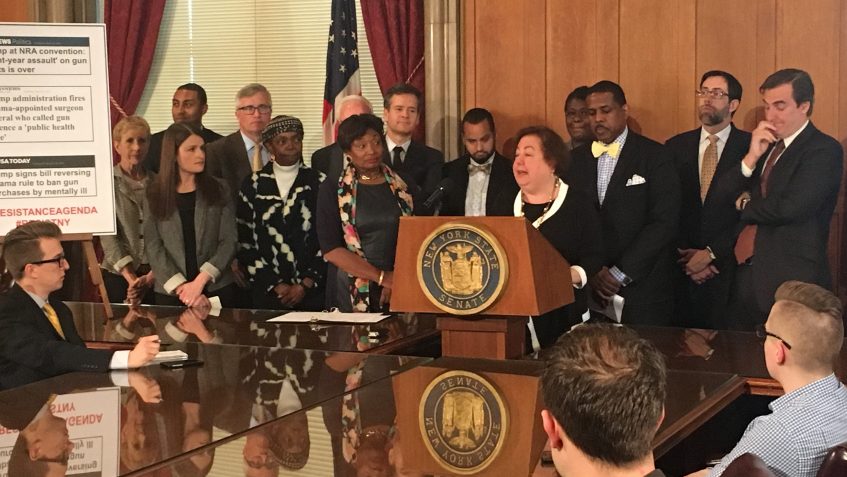 Albany – The New York State Senate Majority today passed major legislation to combat gun violence and protect all New Yorkers. The Senate Democrats have been leaders in standing up to the corporate gun lobby, and have offered a series of common sense bills to address the repeated tragedies caused by gun violence.

“We have a responsibility to keep New York families safe and secure from gun violence,” said Senator Liz Krueger. “That means enacting commonsense laws that the vast majority of people, including gun owners, support. It’s simply not enough to offer words of condolence after yet another school massacre, yet another teen gun suicide, yet another incident of domestic violence with a gun. These tragedies are preventable, and today we have taken an important step to do just that.”

The historic legislation passed by the Senate Democratic Majority includes:

Extreme Risk Protection Orders: This bill, S.2451 introduced by Senator Brian Kavanagh, allows law enforcement officials, family and household members and certain school officials to seek a court order requiring a person likely to harm themselves or others to relinquish any firearms in their possession.

Bump Stock Ban: This bill, S.2448 introduced by Senator Luis Sepulveda, prohibits the possession of a device that accelerates the rate of fire of a firearm.

Preventing School Districts from Allowing Teachers to be Armed: This bill, S.101A introduced by Senator Todd Kaminsky, prevents K-12 schools from authorizing anyone other than a security officer, school resource officer, or law enforcement officer to carry a firearm on school grounds.

Gun Buy Backs: This bill, S.2449 introduced by Senator Shelley Mayer, directs the State Police to devise regulations for gun buyback programs so that all buyback programs across the state are operated consistently with uniform best practices.