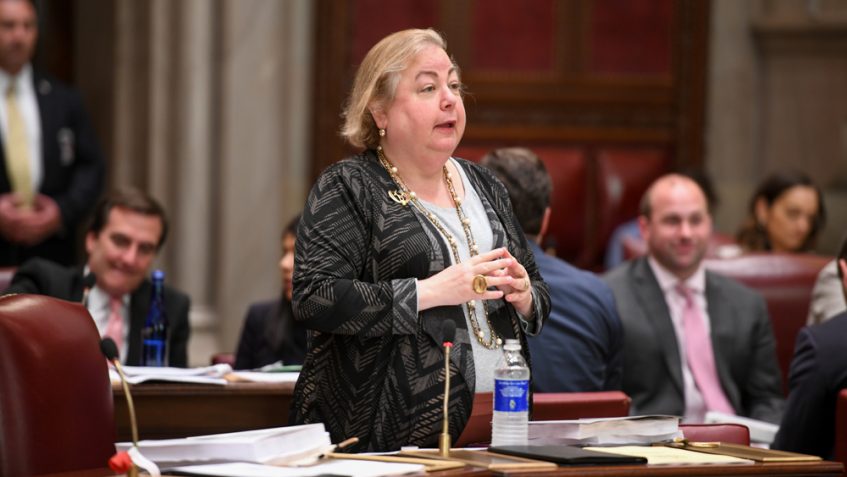 by admin in Home Page, News
Albany – Today the New York State Senate unanimously passed a bill (S.517/A.272), to update the New York State Constitution’s Equal Rights Amendment to be fully inclusive and self-executing. The bill is carried in the Assembly by Assm. Rebecca Seawright. In order to be adopted into the constitution, the amendment must be passed in two consecutive legislative sessions (ie, 2019/20 and 2021/22), then be approved by voters in a referendum.

“Equal rights are for everyone,” said Senator Krueger. “The 1930s-era equal rights language in our State Constitution is long overdue for an update. Women have waited far too long to be included, but so have LGBTQ people, people with disabilities, Latinx people, and everyone who has faced discrimination based on characteristics that are beyond their control. First passage of a real, inclusive ERA in the Senate means we’re one step closer to having a constitution that reflects and protects all New Yorkers.”

To view Senator Krueger’s floor remarks today on the passage of the bill, click here.

“The expansion of equal rights in the New York State Constitution is long overdue,” said Assembly Member Seawright. “We will continue to work with colleagues in the Assembly and the Senate to move towards an expanded constitutional amendment so that the voters of New York can decide at the ballot box.”

The broadly inclusive language of the amendment surpasses the equal rights provisions of every other state in the nation, as well as that of the U.S. Constitution.Though the federal Equal Rights Amendment, which would have granted women equal rights in the U.S. Constitution, narrowly missed getting enough states to ratify it, 11 states, including California, Oregon and Illinois, have passed state ERAs pertaining to women. New York is not one of those 11 states. No state has explicitly granted equal rights to LGBTQ people or the disabled.

In addition, due to a 1949 court decision, the current constitutional language fails to be self-executing, meaning any protections for individual civil rights must be backed up by specific legislation. Today’s amendment would fix this loophole by clearly defining “civil rights,” thereby making the provision self-executing.