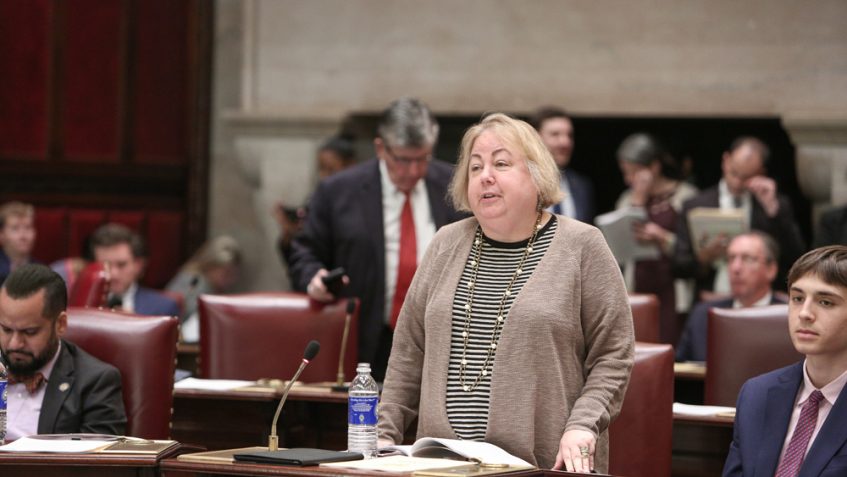 Albany – Senator Liz Krueger (D-Manhattan) and Assemblymember Amy Paulin (D-Scarsdale) applauded passage of a bill to preserve existing restrictions on houses of worship and 501(c)(3) not-for-profit organizations from participating or intervening in political campaigns in support or opposition to a candidate for office. The bill (A. 623 / S. 4347) would enshrine in state law the 65-year balance achieved under federal tax law by the “Johnson Amendment,” whereby religious and 501(c)(3) non-profit corporations are granted tax-exempt status but may not endorse or oppose a candidate for political office.

“This is a simple bill that serves an important purpose – to keep in place standards we have had in this country for over sixty years that shield not-for-profits and houses of worship from political entanglement,” said Senator Krueger. “The administration in Washington has repeatedly said they want to repeal these protections, and open the door for big-money donors to launder campaign contributions through churches, mosques, and synagogues. This bill makes clear that in New York State we know this long-held standard is not broken, and we don’t want Washington to try to ‘fix’ it.”

“Under this bill, New York would become the first state to protect against a potential flood of undisclosed campaign contributions through third parties to sway our elections that would perversely confer a tax benefit to the donors,” said Assemblymember Paulin. “The strongest voices defending the Johnson Amendment have come from thousands of nonprofit organizations, charities, churches, synagogues, and other congregations who believe it serves an essential purpose in reassuring the public that their charitable mission warrants their tax-exempt status, and that they conduct themselves with independence and integrity. If the federal government will not defend this tradition of decency and nonpartisanship, then New York must.”

This provision within federal tax law for 501(c)(3) tax-exempt entities is referred to as “the Johnson Amendment” after sponsor and then-Senator Lyndon Baines Johnson. The measure was so uncontroversial that it was included by the U.S. Senate without discussion or debate in the Internal Revenue Code of 1954 which was signed into law by President Dwight D. Eisenhower. It was reaffirmed and strengthened under President Ronald Reagan and a Democratic Congress in 1987.

However, President Donald Trump and Vice President Mike Pence repeatedly promised to repeal this requirement under tax law throughout their campaign, and have only escalated their rhetoric since taking office. President Trump in an interview with Rev. Pat Robertson for The 700 Club falsely claimed that he had already repealed the law. Throughout the past two years, there were frequent attempts at repeal via standalone bills, as well as attempts to incorporate repeal into larger pieces of legislation, including the House of Representatives version of federal tax reform.

Thus far, attempts at federal repeal have been unsuccessful. However, nonprofit organizations and good government groups have raised dire predictions on the potential for corruption absent these federal standards. Political donors directly contributing to their preferred candidate must stay within campaign finance limits and their donation must be publicly reported. Campaign donations confer no tax benefit for the donors. However, should a church or nonprofit be allowed to endorse and support that same candidate, a donor could make a donation exceeding campaign finance limits to that church or organization and then claim a charitable contribution deduction on their taxes. Houses of worship in particular do not need to register with the IRS or file informational returns about their donors, donations, or expenditures, creating a new stream of “dark money” to influence elections.

The bill would codify the Johnson Amendment into state law for any New York corporation, association, trust, fund, foundation, or limited liability organized and operated for religious, charitable, scientific, public safety, literary, or educational purposes as defined by section 501(c)(3) of the internal revenue code, and would continue that requirement in New York even if the Amendment were to be repealed in the future at the federal level.

“The public expects nonprofit organizations to serve public, not political, interests,” said Doug Sauer, CEO of the New York Council of Nonprofits, which represents over 3,000 nonprofit organizations across the state.  “With the Trump Administration threatening to tear down the wall between nonprofits and electoral politics, it’s important that New York establish its own legal framework.”