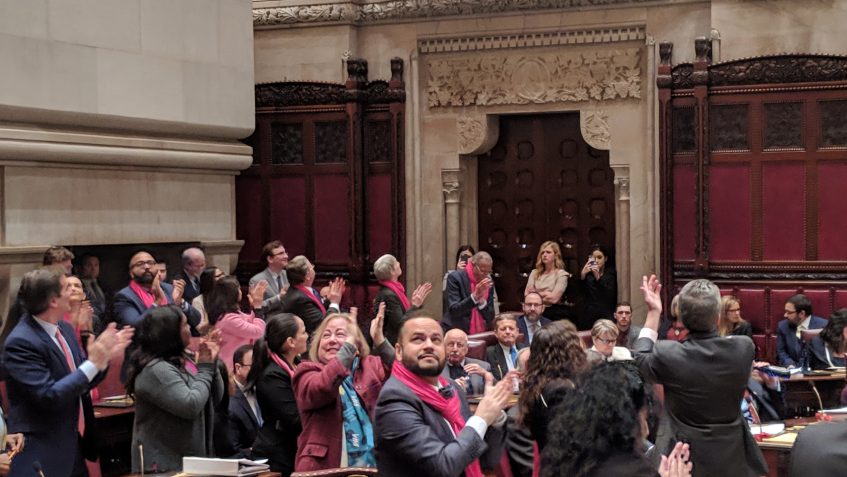 Albany –  The Senate Majority today passed a series of historic legislation that will protect and ensure New York women’s health rights. Passed on the 46th anniversary of the Roe v. Wade Supreme Court decision, the Reproductive Health Act (RHA) will codify that decision into New York law and modernize New York’s statutes to protect women’s rights. The Senate Majority also passed the Comprehensive Contraception Coverage Act (CCCA) that will ensure insurance companies cover FDA-approved contraceptive drugs, devices and products. Additionally, the Boss Bill that passed will prevent an employer’s religious beliefs from infringing on women’s health care decisions. The Senate Majority, together with the Assembly Majority, passed these three important bills through the Legislature swiftly to ensure New York State again becomes a leader in the fight to protect and expand women’s rights.

“The decision about whether to have an abortion is deeply personal,” said Senator Liz Krueger, sponsor of the Reproductive Health Act. “It involves a complex weighing of a woman’s unique circumstances, her medical needs, her private morality, and her own body. That is why it is a decision that must be made by a woman and her healthcare provider alone – not by the government. Our abortion laws, once groundbreaking, are now almost fifty years old. They do not meet the standard set by Roe v. Wade, and they do not reflect modern medical practice. We will never know how many New York women have suffered and even died because our outdated laws prevented them from getting the care they desperately needed. Today we turn the page. By enacting the RHA, the CCCA, and the Boss Bill, New York will once again lead the nation on women’s reproductive healthcare, and help ensure that all New Yorkers have the freedom and opportunity to make their own decisions about their health and their families.”

Video of the floor debate on the Reproductive Health Act can be seen by clicking here.

The historic legislation passed by the Senate Democratic Majority includes:

Reproductive Health Act: This bill, S.240, introduced by Senator Krueger, will modernize New York’s nearly 50-year-old statutes regarding abortion and ensure that New York State law treats abortion as health care, not a criminal act. The Assembly has passed this version of the RHA in 2017 and 2018.

Comprehensive Contraception Coverage Act: This bill, S.659-A, introduced by Senator Julia Salazar, will require health insurance companies to include coverage of all FDA-approved contraceptive options, as well as contraceptive counseling, and services. The Assembly first passed this legislation in 2015.

Boss Bill: This bill, S.660, introduced by Senator Jen Metzger, will ensure that employees or their dependents are able to make their own reproductive health care decisions without incurring adverse employment consequences. The Assembly has passed it each year since 2014.