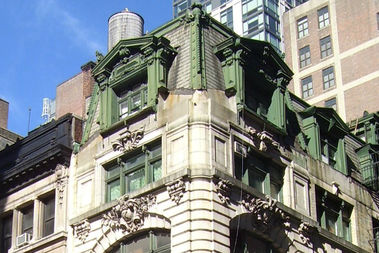 by admin in Home Page, News
New York – Today, State Senators Liz Krueger and Brad Hoylman released a letter to Landmarks Preservation Commission Chair Meenakshi Srinivasan calling for the Commission to consider landmarking the historic Kaskel & Kaskel building at 316 Fifth Avenue. The letter is reprinted below and can also be viewed here.
“Our city is experiencing an unprecedented explosion of development, and it is vital that we proceed thoughtfully and give consideration to the needs and character of our neighborhoods,” said Senator Krueger. “316 Fifth Avenue is an historically significant building that contributes to the character of the local neighborhood, but has been overlooked for landmarks protection. Given that the wrecking ball is dangerously close for this building, we must act quickly to protect it for today’s residents and future generations to enjoy.””This isn’t a strip mall in Southern California,” said Senator Hoylman. “The Kaskel Building is a Fifth Avenue Beaux-Arts jewel and to lose it to a 40-story luxury condominium so a Los Angeles real estate developer can make a fat profit would be an unacceptable loss for our city’s architectural history. The LPC must heed the call of our neighbors and preservationists and immediately calendar this 115-year old building for landmark status.”

The Kaskel & Kaskel building, built in 1902, was originally the home of a men’s clothing store. It retains many original features, and is one of few buildings remaining from a time when the surrounding neighborhood contained many high-end retail establishments. For several years local activists have been attempting to safeguard the building through a proposed expansion of the Madison Square North Historic District, which was rejected by LPC, and as an individual landmark. The current owner of the building has recently announced plans to demolish it in order to make way for a 539-foot luxury condominium tower.

We write to add our voices to those of Council Member Daniel Garodnick, Manhattan Community Board 5, the 29th Street Neighborhood Association, and many other members of the community in calling for LPC to promptly calendar for review the Kaskel & Kaskel building at 316 Fifth Avenue.

This building is an excellent, 115-year old example of the Beaux Arts style, the first Manhattan building designed by architect Charles Berg. The building has many significant original features intact, including its marble and limestone façade, copper-clad mansard roof, and original limestone cartouches featuring the letter “K” for the Kaskel & Kaskel firm. The building is also emblematic of an important period in the history of the neighborhood, when it began to emerge as a retail district at the turn of the last century.

It has been reported that the owners of the building are planning to demolish it and several neighboring buildings in order to build a large luxury tower. The loss of the Kaskel & Kaskel building would be yet another blow to this neighborhood that is rapidly losing the buildings that contribute to its sense of place and character.

In light of the imminent threat of demolition, we urge you to act quickly to save this building before it is lost to the city forever. Thank you for your consideration in this important matter.