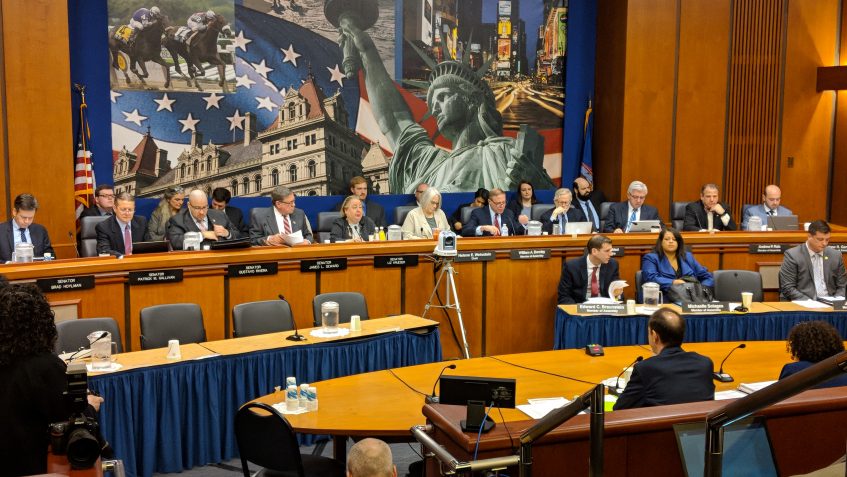 by admin in Home Page, News
Albany – Today the State Senate Committee on Ethics and Internal Governance, chaired by Senator Alessandra Biaggi, voted to move S.3287/A.1835, a bill to create a nonpartisan legislative budget office similar to those used by the New York City Council and the US Congress. The bill is sponsored by Senator Liz Krueger, Chair of the Senate Finance Committee, and Assembly Assistant Speaker Félix W. Ortiz.

“There’s no question that the way we do budgets and fiscal notes in Albany can be improved,” said Senator Krueger. “Right now the process involves a lot of making it up as you go along. A nonpartisan legislative budget office will be an invaluable resource for everyone – legislators, advocates, voters – to get the facts on revenue and spending. I look forward to conferencing this bill with my colleagues as we slowly but surely work to transform Albany into a model of good government.”

”A new nonpartisan budget office represents a step towards the open and transparent government New Yorkers want,” said Assistant Speaker Ortiz. “As a government for the people, everyone deserves access to “actual” New York State budget figures so that sound financial decisions and plans can be made. I look forward to discussing this issue with my colleagues in the Assembly.”

A nonpartisan legislative budget office (LBO) would provide objective analysis of the state’s budget and fiscal situation. Modeled on the Congressional Budget Office (CBO), the mission of the LBO would be to provide budget, economic and policy analysis for New York residents and elected officials. The LBO would increase the legislature’s understanding of the budget and how it affects New Yorkers.

“Budget choices are among the most important decisions government makes because we are allocating our limited resources to meet the people’s needs,” said Senator Biaggi. “More accurate information will lead to better decisions and better use of taxpayers’ money.”

“We are pleased to see the Senate Ethics Committee led by Senator Biaggi taking up important bills to help change the culture of secrecy in Albany. How the state spends taxpayer money is a nonpartisan issue,” said Susan Lerner, Executive Director of Common Cause/NY. “An independent legislative budget office will ground Albany’s historically opaque budget process in actual facts that the public can trust.”

Currently, the majority and minority parties of each house of the Legislature as well as the Governor have a fiscal and budget staff to provide them insight into the financial matters of the state. These partisan offices provide information solely to their respective membership. Rather than using unbiased figures, each house uses its numbers to advocate for their priorities. A single nonpartisan budget office will ameliorate the situation and provide all the members with raw data they can use to shape policy and inform debate.

The effectiveness of the LBO rests squarely on its ability to serve all members of the Legislature, regardless of the house in which they serve or the side of the isle on which they sit. To achieve this end, under this legislation, majority and minority members would be granted equal access to the services of the LBO and reports it prepares. At the committee level, the LBO would have to respond to requests for information from the chairs and ranking members of Senate and Assembly committees. At the member level, the LBO would have to provide assistance in preparing fiscal notes for bills at the request of any legislator. This request would be based on a priority processing system developed by the Director in consultation with the chairs and ranking members of the Senate Finance Committee and Assembly Ways and Means Committee.