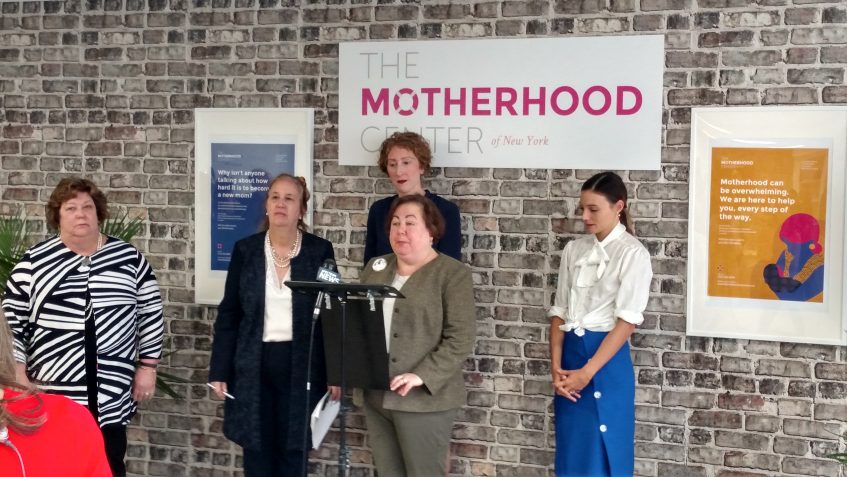 by admin in Home Page, News
Albany – Today the State Senate unanimously passed S4000, sponsored by Senator Liz Krueger, which would improve treatment options for women diagnosed with maternal depression. The bill is carried in the Assembly by Assembly Member Diana C. Richardson (A8308).
“Having a baby can be an incredible and rewarding experience for moms and families, but it is also a very challenging time,” said Senator Krueger. “1 in 10 new mothers will experience symptoms of maternal depression, and too many of them will suffer in silence.  This bill will improve access to treatment so that women can get the resources they need to overcome maternal depression. I thank my Senate colleagues for their support. Maternal depression is very treatable, and New Yorkers need to know that there is help available.”S4000/A8308 would require the creation of a centralized list of available community resources, peer support groups, and providers who treat maternal depression, which would help providers conducting screenings make appropriate referrals and get more women access to treatment. The bill also requires the state to invest in maternal depression treatment resources including strengthening and expanding a statewide hotline, encouraging peer support and telemedicine options, and improving the capacity of referral networks.

In 2014, Senator Krueger and Assembly Member Richard Gottfried sponsored legislation, which passed unanimously in both houses of the Legislature and was signed into law by Governor Cuomo, to provide education and promote screening and treatment-referrals for maternal depression. Maternal depression includes a range of perinatal mood disorders, emotional and psychological reactions a woman may experience during pregnancy or up to a year after childbirth. Symptoms can include feelings of despair or guilt, sadness, fatigue, difficulty concentrating, changes in appetite, and thoughts of suicide or of harming the baby. Maternal depression includes prenatal depression, “baby blues,” postpartum anxiety, postpartum depression, and postpartum psychosis. The latter is the most severe of these conditions, often including hallucinations and delusions, and results in infanticide and suicide rates of four and five percent, respectively.