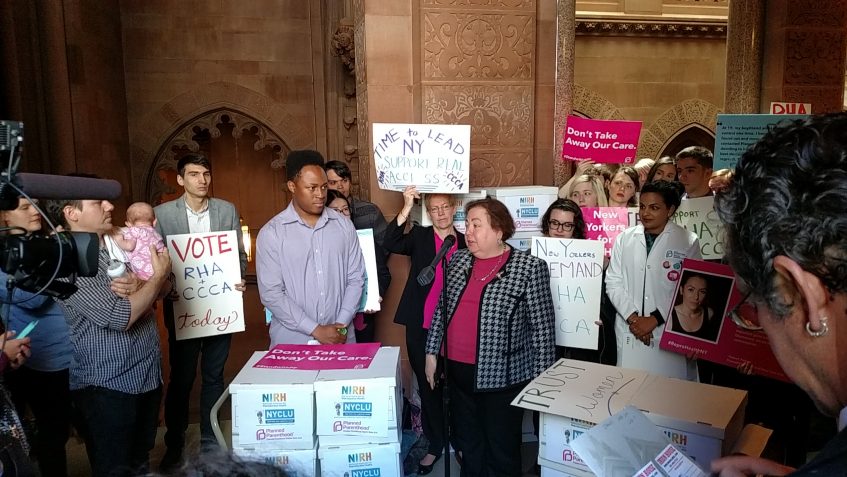 by admin in Home Page, News
Albany – State Senator Liz Krueger, Co-Chair of the Bipartisan Pro-Choice Legislative Caucus (BPCLC), issued the following statement today after the passage in the Assembly of the Reproductive Health Act (A1748/S2796), the Boss Bill (S3791/A566), and the Comprehensive Contraception Coverage Act (S3668/A1378). Senator Krueger is the prime Senate sponsor of the RHA and the Boss Bill, and a co-sponsor of the CCCA:

“Once again I commend my colleagues in the Assembly for making it clear that the government and employers have no business interfering in New Yorkers’ personal decisions about reproductive healthcare. Reproductive rights are under attack across the country, and soon we may not even be able to rely on the limited protections provided by Roe v Wade. Now is the time for New York to lead, with modern laws ensuring that decisions about reproductive health are the sole responsibility of a woman or a man and their medical providers. I call on the Senate Republican/IDC Coalition to bring these bills to the floor for a vote. The rights of New York State families should be fully protected by New York State laws.”

BACKGROUND:The Reproductive Health Act (RHA), (A1748/S2796) sponsored in the Assembly by Assm. Deborah Glick, would secure and protect access to abortion in New York State. Last updated in 1970, New York’s abortion law falls short of constitutional protections as defined by Roe v Wade in 1973, and does not reflect current medical practices. The RHA would explicitly allow for constitutionally-protected care late in pregnancy when a woman’s life or health is at risk, or a fetus is not viable. Currently, discrepancies between state and federal law often force critically ill pregnant women to leave the state in order to get the care they need. Additionally, the RHA repeals outdated and unconstitutional criminal statutes prohibiting abortion, and moves the regulation of abortion into the public health law. This ensures that New York State law treats abortion as health care, not a criminal act.

The Boss Bill, (S3791/A566), sponsored in the Assembly by Assm. Ellen Jaffee, would close a glaring loophole in New York’s existing workplace anti-discrimination laws. The bill would protect all workers, both men and women, from being discriminated against by their employers for their reproductive healthcare decisions or their use of the available range of reproductive care services, whether covered by insurance or otherwise. This would include, for example, women who have become pregnant and are accessing pregnancy-related healthcare services, regardless of their marital status or sexual orientation.

The Comprehensive Contraception Coverage Act (S3668/A1378), sponsored in the Assembly by Assm. Cahill, requires every applicable group or blanket insurance policy to provide coverage for all FDA-approved contraceptive drugs, devices, and other products, including all FDA-approved over-the-counter contraceptive drugs, devices, and products as prescribed or as otherwise authorized under state or federal law; requires applicable group or blanket policies to cover emergency contraception, voluntary sterilization procedures, patient education and counseling on contraception, and follow-up services related to the drugs, devices, products, and procedures covered; provides for the coverage of a 12-month supply of a contraceptive at one time; and prohibits applicable group or blanket policies from imposing a deductible, coinsurance, co-payment, or any other cost-sharing requirement on coverage provided.