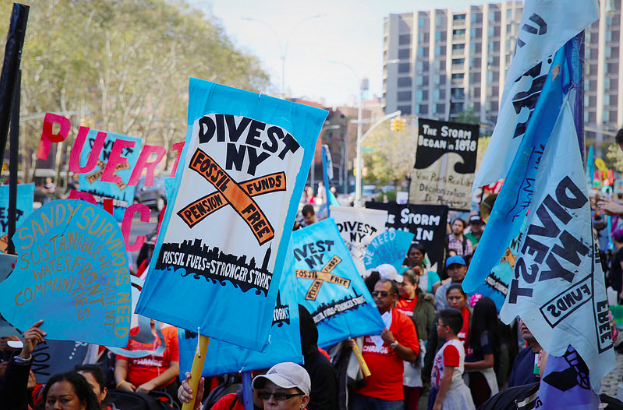 by admin in Home Page, News
Albany – State Senator Liz Krueger released the following statement today regarding the announcement by New York State Comptroller Thomas DiNapoli that his office will review whether to divest from 27 coal companies:

“I commend Comptroller DiNapoli for taking this first step down the inevitable and necessary path to fossil fuel divestment. There is absolutely no question that coal has become a lose-lose investment, both for the fund’s bottom line and for the future of our society; state workers and retirees will be better off when these companies are no longer in the portfolio. Much of the credit for this progress should go to the dedicated climate activists who continue to push this issue to the fore.

“However, in reality, this kind of incremental action is not commensurate with the severity of the crisis we’re facing. I continue to urge the Comptroller to reach the logical conclusion of today’s announcement, and move swiftly to fully divest the pension fund from all oil, gas, and coal producers.

“My bill, the Fossil Fuel Divestment Act, creates a responsible process for identifying and divesting from the companies most at risk of rapid loss of value in the coming transition. The bill continues to gain momentum in the Legislature, recently climbing to 30 co-sponsors in the Senate. But I have also said since day one that I would be more than happy for the Comptroller to beat us to the punch and take this responsible step on his own. The climate crisis, and our responsibility to both current and future retirees, demands nothing less.”

###
BACKGROUND:
The recently updated Fossil Fuel Divestment Act, which has 30 co-sponsors in the Senate and 41 in the Assembly, would direct the New York State Comptroller to divest the state employee pension fund, called the Common Retirement Fund, from all direct and indirect investments in companies that meet the bill’s definition of coal, oil, or gas producers. Divestment from coal producers would be completed within two years; divestment from oil and gas producers would be completed within five years. Divestment would be subject to a Determination of Prudence issued by the Comptroller, certifying that divestment complies with his fiduciary obligations and the “prudent investor rule” as defined in state law.

Supporters of divestment argue not only that it is no longer acceptable to financially support the extraction of climate-destabilizing fossil fuels, but also that the state pension fund is exposed to increasing financial risk by holding onto fossil fuel companies, which stand to lose significant value as the world acts to mitigate climate change. A recent report from Carbon Tracker revealed that no major oil company is making capital investments that align with the goals of the Paris Agreement to keep global warming below 2°C, let alone the now broadly accepted goal of 1.5°C. The Common Retirement Fund has lost more than $260 million in coal investments since 2010, and a recent study by Corporate Knights estimated that the Fund is valued at $22.2 billion less than it would have been had it divested from fossil fuels in 2008 and redistributed those monies across the rest of the portfolio.

Companies placed on the exclusion list would have an opportunity to contest their inclusion, either by demonstrating that they had been added in error, or by presenting clear and convincing evidence that they will have moved out of fossil fuel production and no longer meet the list criteria by 2030. In other words, fossil fuel producers that are making real and demonstrable strides to wind down their oil, gas, or coal production in a timely fashion will not be subject to divestment.

The new bill also contains a significant change to protect the Comtproller’s investment discretion and address concerns about constitutionality. Before divestment can commence, the Comptroller must issue a Determination of Prudence, stating whether he believes that divestment from any or all of the companies on the exclusion list complies with his fiduciary responsibility and the “prudent investor rule” defined in state law. If the Comptroller determines it would not be prudent to divest from any particular company, that company would be removed from the exclusion list. All companies removed from the list would be reconsidered for exclusion within five years.

Worldwide there are currently 1,145 institutions that have committed to divest, including universities, faith-based organizations, non-profits, municipalities, philanthropic organizations, and national and state pension funds, controlling $11.54 trillion in assets. In 2018, Ireland became the world’s first nation to fully divest its $10.4 billion sovereign wealth fund from fossil fuels.

The global divestment movement is having an impact on fossil fuel producers, in part through the process of stigmatization, which can damage enterprise value by discouraging engagement by business partners, employees, lenders, governments, politicians, etc, as well as leading to restrictive legislation. The increased scrutiny tar sands have received as a result of divestment and allied stigmatization campaigns was a contributing factor to Exxon’s decision to write down the value of its tar sands reserves. Peabody Energy, a coal producer that went bankrupt in 2016, said of the divestment movement: “the impact of such efforts may adversely affect the demand for and price of securities issued by us, and impact our access to the capital and financial markets.” Shell now cites divestment as a major material risk to its current business model, which could lead to project delays or cancellations and could affect its ability to access capital.

The Common Retirement Fund, with $210.5 billion in assets as of March 31st, 2019, has invested $2.7 million in Peabody Energy, $133 million in Shell, and over $1 billion in Exxon, and has between $6 and $12 billion directly or indirectly invested in all fossil fuel producers.